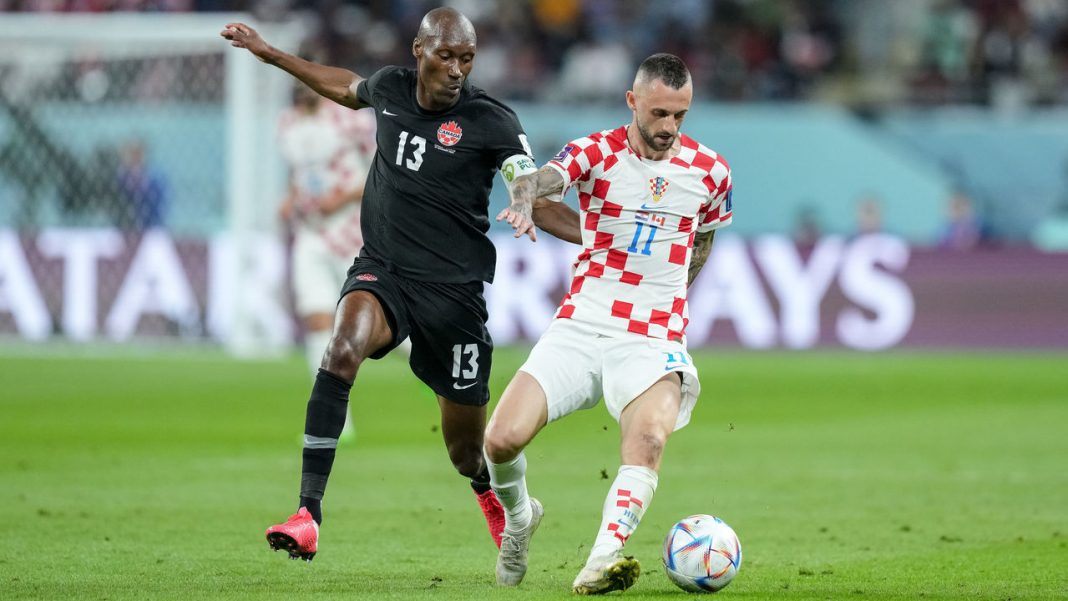 The 2022 World Cup is in full swing. At the end of every matchday, we’ll review the biggest talking points emanating from Qatar and break down all the action on the pitch. Below, we look back on Day 8 of the tournament.

The men’s national team learned a lot of harsh lessons in just over 180 minutes of football in Qatar. Canada played incredibly well against Belgium but lacked composure in the final third. It started brightly against Croatia but lost control after 25 minutes. John Herdman’s side couldn’t put it all together. What it had in spirit, it lacked in experience.

Zlatko Dalic’s side forced Canada to backpedal and, like Belgium, took the lead minutes before halftime. The Croatians ran freely in midfield, and the Canadians switched off at the worst possible time to gift Croatia at least two of its four goals. Canada couldn’t manage the game after taking the lead and struggled to mount a comeback once it lost the advantage.

Atiba Hutchinson was one of Canada’s weakest links in the first half. The 39-year-old allowed Andrej Kramaric to streak into the area and score Croatia’s first goal, and ambled around the pitch as the Croatians passed their way through the heart of the field.

Herdman thought about substituting Hutchinson when the game was still within reach, but the captain wanted to stay on the field – and did. The coach seemingly allowed a player to make a decision that actually hurt the team, showing loyalty to a legend of the program who was clearly struggling. That can’t happen.

Herdman’s prematch comments also came back to haunt him. By saying Canada would “go and ‘F’ Croatia,” the Englishman inadvertently gave the opposition bulletin board material. The rallying cry, while intended to inspire his players, took attention away from all the good things Canada did in its opener against Belgium – the high pressing, the chances created, the fearlessness in the face of a top-ranked opponent – and left his team open to criticism. His comments, not his players’ positive play, shaped the narrative around this team.

That’s one of many lessons Canada must take to heart. The team could’ve done so much more in Qatar. It’s no longer a question of belief – it’s about execution and composure.

Niclas Fullkrug isn’t the most fashionable of names at the 2022 World Cup. He played in the German second tier as recently as last year and made his international debut in November at the wily old age of 29.

Flick just didn’t know how much he’d need him.

Fullkrug’s vicious equalizer against Spain on Sunday salvaged Germany’s chances in Qatar. It handed the Germans their first point of the tournament, enough to keep hope alive heading into Thursday’s Group E finale against Costa Rica.

And Fullkrug needs to start Thursday. He was far more active in the penalty area than Thomas Muller, the man he replaced, racking up more shots than anyone on the field in just 20 minutes of playing time. Jamal Musiala took up dangerous positions with Fullkrug on the field, and Leroy Sane added a sense of urgency Ilkay Gundogan couldn’t provide.

Germany’s shape changed with Fullkrug up top, and the team finally looked capable of scoring. In a must-win situation, Flick has to make the sensible choice and ride the one player who can make a difference.

But a win over the CONCACAF minnow won’t be enough. Germany needs Spain to beat Japan, or at least hold it to a low-scoring draw, to advance to the round of 16.

Kevin De Bruyne had a feeling.

“No chance, we’re too old,” the midfielder conceded when asked about Belgium’s chances of winning the World Cup by The Guardian’s Simon Hattenstone. The interview, published Saturday, was conducted weeks earlier.

He knew. And, as it turns out, he was onto something.

Belgium, for the second consecutive match in Qatar, was outplayed and overrun by a younger, more athletic, more dynamic team. This time, though, the Red Devils didn’t escape with a result, falling 2-0 to Morocco. The outcome leaves Belgium staring at the very real possibility of a group-stage elimination after reaching the quarterfinals in 2014 and finishing third in 2018. Belgium had the chance to secure progression with a win Sunday, but De Bruyne was largely ineffectual once again, captain Eden Hazard was substituted after an hour of underwhelming play, Romelu Lukaku was a nonfactor upon his return from injury, and Thibaut Courtois, a hero against Canada, was oddly feeble.

“We haven’t seen the best Belgium yet,” manager Roberto Martinez said after the contest. “We haven’t been ourselves.”

The problem, of course, is that the Red Devils have been themselves. This is just what has become of the lauded “Golden Generation,” which, barring a stunning turnaround in the team’s Group F finale against Croatia, will exit the tournament in meek fashion having failed to claim any silverware.

Score one for CONCACAF

CONCACAF, at last, is on the board. After three defeats and three draws to open the tournament, the confederation picked up its first win of this World Cup on Sunday. It came from an unlikely source, too. Costa Rica, which began the competition with a humbling 7-0 defeat to Spain, rebounded nicely, picking up a surprising 1-0 win over Japan via a late, lofted strike from Keysher Fuller. Japan, remember, was coming off a stunning triumph over Germany earlier in the week. Another reminder that there’s no transitive property in football, least of all at the World Cup, where every match is its own spectacle. Los Ticos have now played 180 minutes in Qatar, and, despite having just one shot on target in that time – Fuller’s goal – are in with a chance of advancing out of Group E, widely considered the most difficult quartet in the competition. The World Cup always delivers the unexpected.

Tension is obviously high on the pitch in Qatar, but tempers are flaring off it, too. The latest kerfuffle involves Jurgen Klinsmann and Carlos Queiroz, after comments the former made on BBC irked both the Iranian federation and the team’s manager. Queiroz demanded that the former Germany star resign from FIFA’s technical study group after Klinsmann, in reference to Iran’s win over Wales, said playing dirty and using tricks to influence the referee fits the team’s “culture.” Queiroz dubbed the remarks a “disgrace to football” during an impassioned Twitter retort. Klinsmann is a former coach for the United States. The USMNT plays Iran in a critical Group B encounter Tuesday.

The Atlas Lions are roaring. Sunday’s 2-0 win over Belgium, spurred on by raucous support inside Al Thumama Stadium, has Morocco on the verge of the World Cup knockout stage for just the second time, and first since 1986. Considering the turmoil surrounding the team just months ago, it’s a dazzling achievement just to be in this position with one group game left. Former manager Vahid Halilhodzic – who froze Hakim Ziyech out of the team – was fired in August and replaced by Walid Regragui, who only had three friendly matches before the World Cup with which to tinker and put his imprint on the team. That’s been plenty, though. Morocco has yet to concede a goal under Regragui – the team’s shutout streak stands at six matches and dates back to June – and, more impressively, hasn’t really looked like conceding in Qatar. The organized and compact Moroccans have a genuine chance of not only winning Group F going into their final game against already-eliminated Canada, but of also making a deep run in the competition thanks to an airtight backline that makes the opposition work for every little opening.

Mateo Kovacic was an absolute monster against Canada.