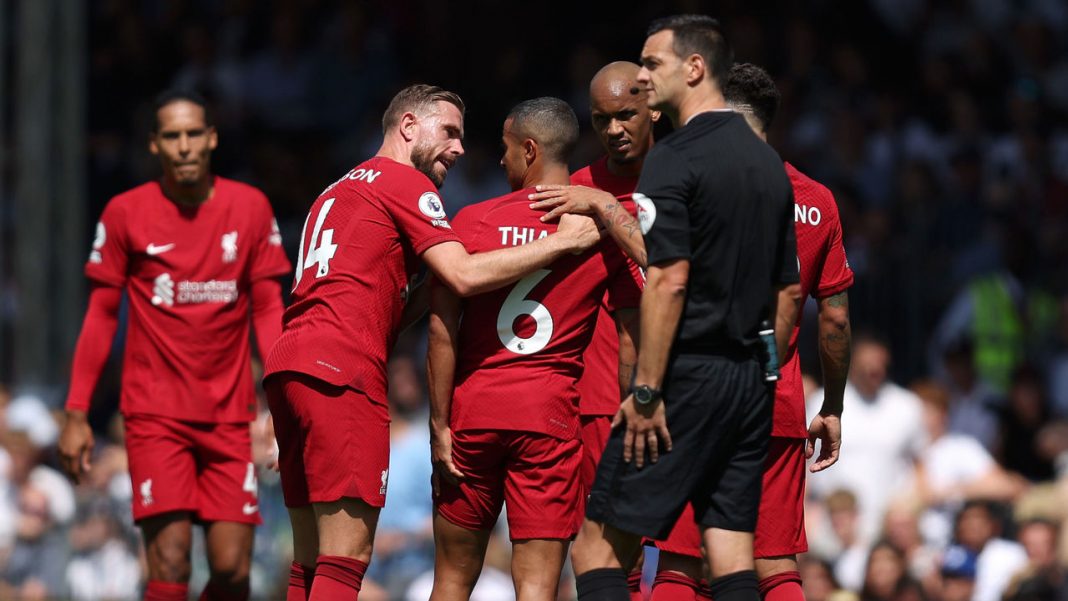 The Premier League is back! theScore examines the most important developments and discusses the biggest talking points from Saturday’s busy slate of action in England’s top flight.

Is there enough energy in Liverpool’s midfield?

Fulham’s attackers diligently tracked back while Harrison Reed and Joao Palhinha, positioned in front of the defense, frustrated Liverpool and kick-started attacks. Crowd favorite Tim Ream was committed at the back. It was a studied and industrious performance, one which suggested this iteration of the Cottagers is more assured and settled than other Fulham teams that reached the Premier League in recent years.

But this was more than an earned point for Fulham; there were some issues with Liverpool’s midfield that led to a disappointing 2-2 draw to begin the Reds’ title challenge.

True, Liverpool are currently short-handed. Alex Oxlade-Chamberlain, Curtis Jones, and Naby Keita were already dealing with injuries before Thiago Alcantara joined them after suffering a hamstring problem during the second half. However, even before these ailments, there were legitimate concerns over the fitness and consistency of Thiago, Jordan Henderson, and the rest who play in front of Fabinho in midfield.

Before his 50th-minute substitution, Thiago was overrun and unable to orchestrate attacks in his usual unruffled fashion. He attempted just one through ball, and that failed. Meanwhile, Henderson was once brutally exposed by the excellent Aleksandar Mitrovic. He did almost pinch a win for Liverpool with a smash against the crossbar in injury time, but he was otherwise too frantic and didn’t always appear in the right positions.

There was a North American flavor to Leeds United’s 2-1 victory over Wolverhampton Wanderers.

There no doubting it: Major League Soccer is an established breeding ground of top-end talent.

Aaronson and another summer arrival from Red Bull Salzburg, Rasmus Kristensen, were among Leeds’ best performers. Aaronson faded a little in the second half, but that was understandable given his all-action performance. His pressing helped squeeze out the opportunity that resulted in Rodrigo’s equalizer, he held up the ball well, and he was generally the most threatening attacker in Marsch’s ensemble. It was no surprise Aaronson was breathing down Ait-Nouri’s neck during the full-back’s own goal.

It’s doubtful that any current Leeds player will reach the high standards of Raphinha – who joined Barcelona this summer – but the ease in which Aaronson has slotted into Marsch’s side is extremely promising. He’s on course to earn himself a starting berth for the United States at the World Cup.

Southampton had no answer for Dejan Kulusevski. The 22-year-old posed a threat every time he collected the ball. Southampton’s Moussa Djenepo tried his best to contain Kulusevski’s runs on the right flank, dropping deeper every time his opponent picked up the ball. Every time, Kulusevski left Djenepo behind.

Tottenham Hotspur’s 4-1 win Saturday offered ample evidence of Kulusevski’s individual brilliance. He stretched play and switched gears to accelerate into open space, and he spotted teammates on the run by playing with his head up. His Premier League-leading ninth assist of the calendar year came off of a brilliant cross-field pass to Ryan Sessegnon in the first half, a bullet of a cross that met his opposite number as he ran into the box. Kulusevski then scored a goal of his own, opening up his body in the area before firing into the far corner.

He was simply too much for Southampton. Because the visitors lacked the pace to handle Kulusevski’s constant change of speed, they had no choice but to backpedal to cover the space behind them. Kulusevski accepted the trade-off, cutting inside to deliver balls with incredible pace and accuracy.

Antonio Conte’s system allows Kulusevski to do all of the things he does well. With a wing-back to his side, the Swede can focus on making darting runs without worrying about tracking back. Not that he doesn’t do the dirty work. Kulusevski attempted a team-high seven tackles, including five in the opponent’s half.

“Dejan made a big impact (Saturday), but also last season,” Conte told the BBC. “He and Rodrigo (Bentancur) integrated really good with the squad. Dejan has continued in this way, but he has to continue to work in this way with his behavior and ambition. He has a lot of ambition, he wants to become one of the best players in his role. I think this ambition is good, if he is humble and works … he can do that.”

Gerrard could soon feel the pressure

Steven Gerrard can’t blame any of Aston Villa’s failings on a lack of support from the boardroom. Following a January window that included a loan deal for Philippe Coutinho and moves for Lucas Digne and Calum Chambers, Gerrard welcomed Coutinho (this time permanently), Diego Carlos, Boubacar Kamara, and others to Villa Park this summer for over £45 million total.

But the Villans’ 2-0 defeat at Bournemouth shows there’s still a lot of work to do for Gerrard. The Cherries deserved their three points and gave Carlos and Kamara tough introductions to English football. Villa’s big-name players were outclassed by Marcus Tavernier, the midfielder whose move to Bournemouth from Middlesbrough last week was lost amid the transfer chaos.

Gerrard had a strong six games to start his Aston Villa tenure, but his team finished the rest of the 2021-22 season with a worse record than relegated Burnley.

Now, his summer recruitment has significantly lifted exceptions. This is his squad, and an improvement on last season’s 14th-placed finish is needed. Two-goal defeats to newly promoted teams shouldn’t be part of the script.

It won’t take long for fans to get on the Scouser’s back if results don’t improve. His recruitment drive has forced previously established – and largely popular – first-team players like Emiliano Buendia, Douglas Luiz, Tyrone Mings, and Ollie Watkins onto the bench. Some of those changes seemed unnecessary. The Coutinho signing was arguably a huge waste of resources given Buendia’s ability to influence games with more consistency than the Brazilian. Mings often draws plenty of criticism, but is the impulsive Carlos really that much better?

If Gerrard’s signings don’t work out quickly, the fans will be on his back and, by extension, be questioning the work of chief executive Christian Purslow.

Everton limping from the get-go

Everton are already looking worse for wear just 90 minutes into the new season.

The Toffees took the pitch Saturday against Chelsea without Dominic Calvert-Lewin, their only recognized striker outside of Salomon Rondon, who’s scored one goal for Everton in 20 Premier League appearances. They then lost defender Ben Godfrey and center-back Yerry Mina to potential long-term ankle injuries.

Manager Frank Lampard could now have a serious shortage of options in defense and attack. Everton don’t even have the funds to go out and sign replacements. That doesn’t bode well for a team many had regarded as relegation fodder before kickoff.

“When it rains,” Lampard said afterward, “it pours.”

The players, however, don’t seem as short on spirit. They hustled for possession all game and only lost because of a penalty kick midfielder Abdoulaye Doucoure conceded toward the end of the opening period. Anthony Gordon won tackles in his own half, and left-back Vitaliy Mykolenko made crucial blocks. Gordon, Demarai Gray, and summer signing Dwight McNeil ran nice passing sequences. The effort was there, and the game was for the taking. Everton were just missing a presence up front.

There’s some irony here. Despite the obvious lack of depth, the club allowed Ellis Simms, one of the only other center-forwards in its ranks, to leave on loan. The 21-year-old, who’s at Sunderland for the rest of the campaign, served up a timely reminder of his ability with a two-goal performance earlier Saturday.

Unfortunately, Lampard likely knows the deal by now. He’s not going to get much help from majority owner Farhad Moshiri, who’s shown no desire to reinvest the funds from Richarlison’s £50-million transfer to Tottenham. Everton suffered pre-tax losses of £372 million over the last three years, severely handicapping what they can spend on the transfer market. Solutions will have to come from within.

admin
Previous articleRoundup of the latest stories on Chelsea's manic transfer window
Next articleBy the numbers: Standout stats for each EPL club on opening weekend