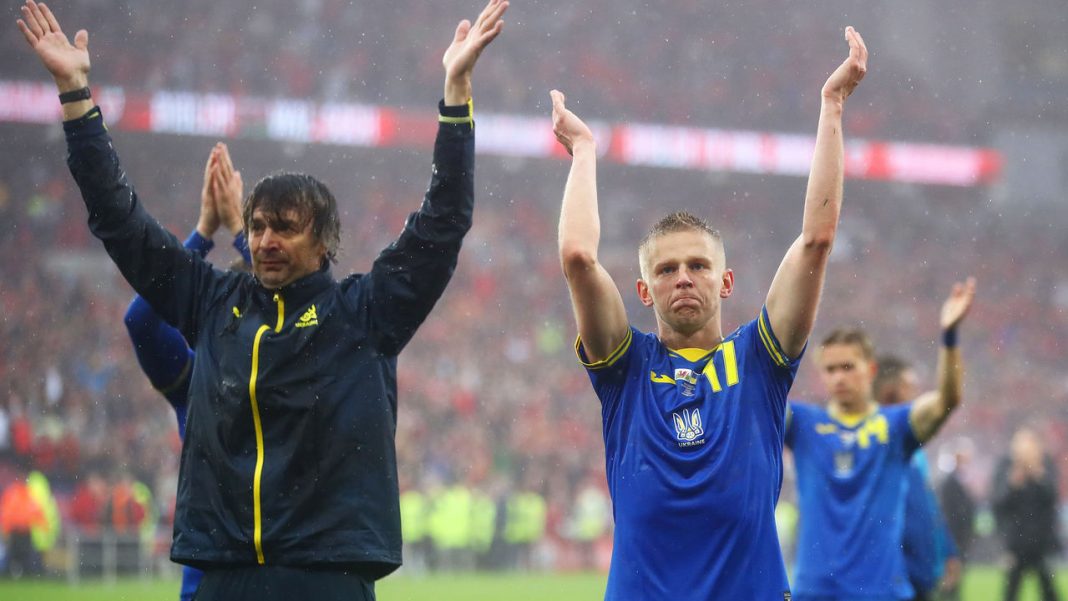 Wales is off to the World Cup for the first time since 1958.

Gareth Bale’s free-kick in the 34th minute forced an own goal from Andriy Yarmolenko, and the Welsh held on to beat Ukraine 1-0 in Sunday’s playoff final at Cardiff City Stadium.

Wales is the 13th and final team from Europe to book a ticket to Qatar. It drops into Group B with England, Iran, and the United States.

Rob Page’s side will face the U.S. first on Nov. 21. It will then meet Iran on Nov. 25 and finish off round-robin play four days later against England.

Welsh goalkeeper Wayne Hennessey – a backup for recently relegated Premier League side Burnley and for his country at last year’s European Championship – made nine saves to preserve a famous clean sheet.

Ukraine outshot Wales 23-10 but couldn’t find a way past the 35-year-old shot-stopper.

The playoff final was originally scheduled to take place in March. UEFA rearranged the fixture following Russia’s invasion of Ukraine.

Six of the players in Oleksandr Petrakov’s starting lineup on Sunday hadn’t played since the war broke out at the end of February. Their first taste of competitive action in months came in Wednesday’s playoff semifinal in Scotland, where Ukraine pulled off an emotional 3-1 victory.

Petrakov made no changes to the lineup on Sunday, and his players didn’t disappoint him. Ukraine outplayed Wales in the first half, and Hennessey continued to frustrate the visitors in the second. The Welshman kept out Viktor Tsyhankov’s close-range effort 10 minutes after the interval and dove to his left to turn away Artem Dovbyk’s powerful header in the 84th minute.

The Ukrainians had hoped World Cup qualification would offer the people of their war-torn country a sense of joy amid the continuing barrage on their homeland. Full-back Oleksandr Zinchenko had said he wanted to give his compatriots a reason to smile, even if only “for a few seconds.”

The war is now 102 days’ old, and on Sunday, Vladimir Putin’s Russian regime, which has classified the invasion as a “special military operation,” resumed airstrikes on the capital of Kyiv.

Nearly seven million people have fled Ukraine since Feb. 24, according to the U.N. refugee agency.

For Wales, the moment has come to celebrate yet another landmark achievement. After reaching the quarterfinals of the 1958 World Cup, the semifinals of Euro 2016, and the round of 16 at Euro 2020, the national team has now qualified for only its fourth major tournament.

Bale, who’s played a starring role in Wales’ revival as a football nation, is likely to continue to captain his country. A pending free agent following the expiration of his contract with Real Madrid, the 32-year-old had previously hinted he could retire.

Asked after the match if he’d postpone his decision, Bale said with a smirk, “For a little bit.”

admin
Previous articleStuff of legend: Why Real Madrid's Champions League run will never be replicated
Next articleTransfer window preview: Top 50 players who could move this summer

theScore picks out the best stats and facts to...
Read more
Premier League

The Premier League is back! theScore examines the most...
Read more
Load more

The dust has settled on the opening weekend of the 2022-23 Premier League season. So, naturally, it's time to overreact about the state of...
Read more