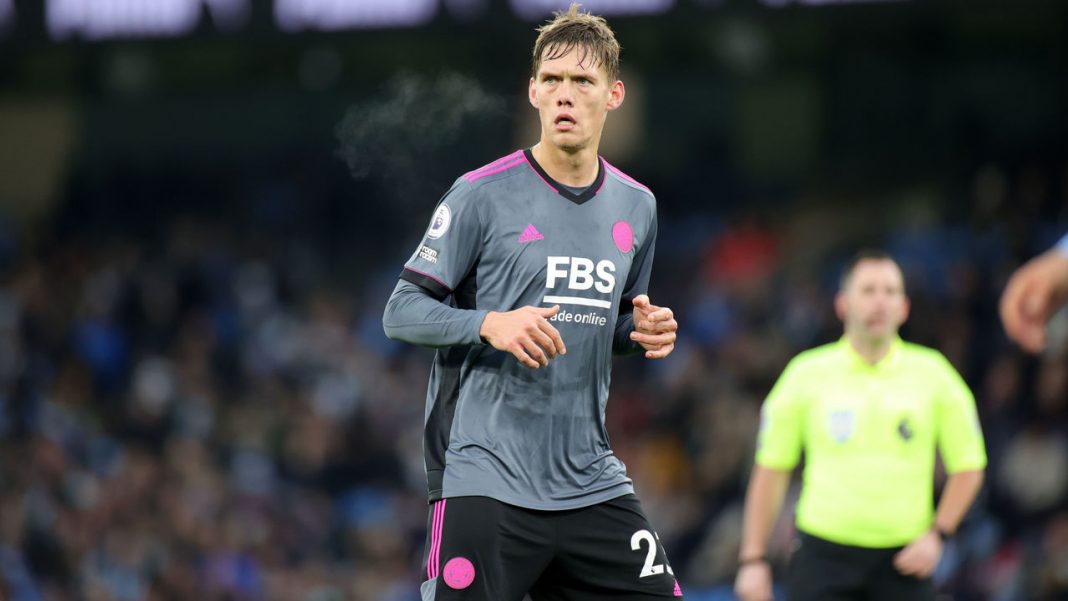 theScore dissects the biggest talking points from a busy Boxing Day slate in the Premier League.

Leicester City disintegrated against Liverpool in Wednesday’s League Cup fixture. They lost on penalties after surrendering a two-goal lead, and much of the collapse was due to the enforced substitutions of injured pair Ricardo Pereira and Caglar Soyuncu. In particular, Brendan Rodgers identified a glaring weakness post-match in the defender who replaced Soyuncu.

“The strength of Jannik (Vestergaard) is different to the strength of Cags,” Rodgers told the Leicester Mercury’s Jordan Blackwell, adding, “when we lost Cags, we couldn’t go into a back four.”

Despite effectively admitting Vestergaard – a £15-million summer signing, no less – can’t cut it in a defensive quartet for Leicester, Rodgers selected the Dane as one of his two center-backs for the Boxing Day trip to Pep Guardiola’s irrepressible Manchester City.

From an attacking perspective, Leicester were unlucky to go into the break without a goal as James Maddison and Ademola Lookman led the Foxes’ upfield dashes. However, the hosts would’ve scored more than four if it wasn’t for Kasper Schmeichel’s athleticism between the sticks.

Rodgers edited at the interval, swapping Ayoze Perez for Timothy Castagne and molding a back three. His team’s three goals in the following 20 minutes were a sign of what could’ve happened if the manager had gotten his tactics right from the start.

Squad rotation is crucial at this point in the festive period, especially for a Leicester side that’s dealt with injuries and COVID-19. However, it seemed Rodgers gave too much consideration to his lineup for next Tuesday’s visit from Liverpool when choosing his XI for the 6-3 defeat at the Etihad Stadium.

Circle Jan. 16 in your diary

While West Ham United drop away and Chelsea still have a cushion in third place, the competition for the last Champions League spot is shaping up to be a two-way battle between the country’s great north London rivals.

Arsenal are gradually shaking the inconsistency that can blight young squads. The defense has steadily tightened up over its past five away matches, and the three-pronged attack of Alexandre Lacazette, Bukayo Saka, and Gabriel Martinelli is feasting on Martin Odegaard’s exemplary service. Saka and Martinelli get plenty of plaudits for their fine work at such young ages, but Odegaard’s two assists in Sunday’s 5-0 win at Norwich City further enhanced his reputation as one of the Premier League’s best creators.

Don’t overlook Tottenham Hotspur, though, who are developing a tough, Antonio Conte-grade veneer since their last domestic defeat in October. Tottenham’s newfound aggressiveness is well-demonstrated by defensive midfielder Oliver Skipp, who scurried into tackles high up the pitch and kept his team ticking in possession in its easy 3-0 Boxing Day victory over COVID-hit Crystal Palace. Harry Kane’s pressing also impressed against the Eagles, but the best showing belonged to Lucas Moura after he logged a goal and two assists.

It’s not too long until Arsenal and Spurs meet in a potentially pivotal match for the outcome of this season’s top-four skirmish. Draw a ring around Jan. 16 in your 2022 calendar.

Chelsea went into their Boxing Day encounter against Aston Villa with just two wins from their last six Premier League matches. During that period, the title hopefuls have been hindered, like much of the league, by a combination of injuries and a COVID-19 outbreak.

Romelu Lukaku’s absence has been most glaring in that time; the Belgian first dealt with a significant ankle injury, and after slowly working his way back, he proceeded to register a positive COVID-19 test that ruled him out of recent draws against Everton and Wolverhampton Wanderers, respectively.

The 28-year-old returned to the squad Sunday and promptly powered Chelsea to a 3-1 victory after coming off the bench to begin the second half; he scored once and won a penalty that allowed Jorginho to seal the points.

Lukaku’s goal – the eventual winner – was a stark reminder of the type of presence the Blues miss when he isn’t available. Aided, in part, by some static defending from Tyrone Mings, Lukaku made a darting run across the Villa defender and connected with a perfect header from just outside the six-yard box. It was exactly the kind of instinctual movement that nobody else in the squad is capable of.

Timo Werner does his best work playing in a wider forward role where he can exploit space in the channels; Christian Pulisic, who started as the de facto No. 9 on Sunday, is a natural winger; Kai Havertz is most dangerous playing off a striker. They each complement Lukaku in different ways, but none can replicate his skill set.

With Manchester City showing no signs of slowing down at the top of the table, the Blues desperately need Lukaku to lead the line, especially considering they take on both Liverpool and City within the next month.

Some players are capable of raising their game when they play with a little bit of anger. Whether it’s boos from rival fans or bickering with opposing players, stoking the competitive fire can help certain stars reach another level.

Wilfried Zaha has always been one of those players, but he can occasionally cross the line and allow that otherwise positive energy to get the best of him.

Zaha was sent off in Crystal Palace’s eventual 3-0 defeat to Tottenham, receiving his marching orders in the 37th minute after picking up two yellow cards in quick succession. The first booking from referee Jon Moss can be deemed a little harsh. But, on the second foul where he threw his arms out to shove Davinson Sanchez to the floor, Zaha needed to exhibit better judgment. It was a classic “moment of madness.”

Palace were trailing 2-0 at the time in a match they tried to have postponed before kickoff due to COVID-19 cases within the squad. It all made for an understandably frustrating situation.

But, as someone who’s rightly viewed as one of the team’s leaders, Zaha needs to do a better job of straddling the line between being feisty and reckless. He’s too important to Palace to miss time because of such an unnecessary incident.

An important few weeks for Brighton

Brighton & Hove Albion goalkeeper Robert Sanchez rapidly launches attacks, and his shot-stopping ability was proven by two excellent saves in quick succession in the Boxing Day scuffle with Brentford. One was a reactionary stop to a deflected effort and the other a swipe at an Ethan Pinnock header. Marc Cucurella, Enock Mwepu, and Leandro Trossard were also nuisances to the visiting Bees.

But Brighton’s 2-0 win over Brentford was the Seagulls’ first league victory since Sept. 19.

Brighton have conceded 11 fewer goals than they had at this stage last season, even after the summer departure of Ben White, so conceding goals certainly isn’t an issue. The main problem with Brighton is – surprise, surprise – converting chances.

Neal Maupay is starting to hit some form with three goals in his past three starts, including his festive thunderbolt against Brentford, but Brighton need a goal-scorer who bulges the net with greater consistency. However, finding a ruthless striker with the physicality and mobility that Potter requires may be out of reach for a club of Brighton’s resources, barring a masterstroke in the transfer market.

Brighton’s transfer business has been among the best in England for some time, so they can improve, albeit gradually. The club’s project has been built on patience since its promotion in 2017.

But Brighton’s biggest job over the coming weeks is to keep hold of one of their greatest assets: technical director Dan Ashworth, who is reportedly sought by nouveau-riche Newcastle United to front their recruitment drive. Replacing him could be even more difficult than uncovering a free-scoring striker.

As a magazine storyteller, Chris Jones has written about...
Read more
Premier League

As a magazine storyteller, Chris Jones has written about...
Read more
Try Now

With the January transfer window open, players on expiring...
Read more
Serie A

22 most exciting youngsters to watch in 2022

Over the next 12 months, a fresh crop...
Read more
Load more

theScore examines the most important Premier League developments from the weekend, dissecting the biggest talking points after a busy slate of action.Brighton, Palace are...
Read more